I flew into Los Angeles on Friday, and when my brother picked me up he said, “Hey, the Space Shuttle is somewhere around here -- do you want to see it?”  He’d had the idea that since it was parked for the night we’d be the only ones going to look at it, but as we got closer we realized how wrong he was; not only was there a huge crowd, there were also police officers directing traffic and people selling food and shuttle t-shirts.  The first thing I thought when I saw it was, Man, this thing is huge (you could see the tailfin looming over various buildings as you moved toward it, like Jaws cutting through the water), and the second thing was, Wow, it’s really taken a beating -- several places had been burned black.  Everyone was smiling and grinning and holding up their kids and taking pictures -- there was a sense of celebration in the crowd, but also sadness, a nostalgia for the space program.

Here it is.  The giant doughnut is iconic Los Angeles. 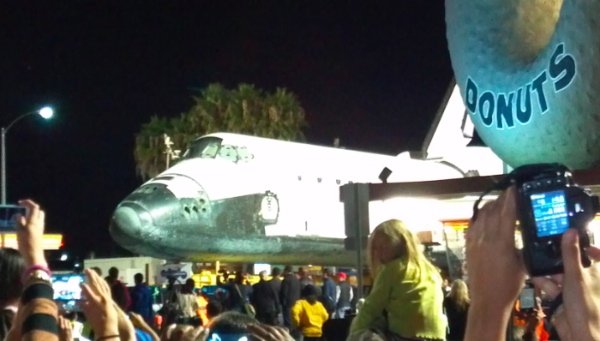