So I went to the American Library Association conference in San Francisco on the same weekend as the Gay Pride Parade, and just after the historic Supreme Court decision to legalize same-sex marriage.  What could possibly go wrong? [Deleted because a friend pointed out that this sounds as if I disliked the verdict, when in fact I thought it was fantastic and delightful and unexpected, and was just trying to say something about anticipating crowds and late trains.]  Luckily the BART ride over wasn't as crowded as I'd feared, and there was an upbeat, celebratory feeling even inside the conference center -- quieter than outside though, since these are, after all, librarians.

I was supposed to be signing my book Weighing Shadows, but since it's coming out in October I was worried that the publisher wouldn't have any copies yet.  But when I got to the Skyhorse booth I saw an entire stack of galleys, so I was pretty damn impressed with how efficient they are.  They turned out to be skillful at other things as well, such as giving away copies of my book to librarians and coming up with promotional ideas.

I guess I can admit now that I didn't like the cover at first.  It showed the main character arriving in another time period -- but her outfit was skin tight (I wanted to say, "They didn't have Spandex in the Middle Ages" but managed to restrain myself), and she had an odd, smirking expression.  It turned out I wasn't the only person who didn't like it, and I saw that the final cover had been retouched.  And people who stopped by for signed copies seemed intrigued by the description on the back, so that was great.

This is the final cover.  I still don't love it, but it's better. 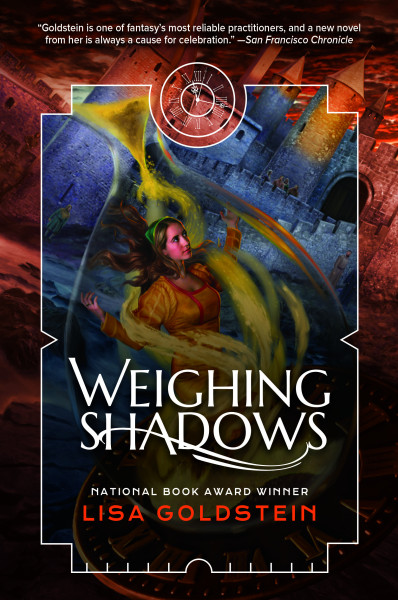 I could have seen a panel with, among other people, John Scalzi and Larry Corriea, but I'm trying not to let this whole kerfuffle take up so much room inside my brain so I decided not to.  As Doug said, I should stop beating a dead Puppy.  (This is not in any way meant as a death threat!  It's an expression!  And it's ridiculous I even have to say this, but people have been known to misunderstand things on the Internet.)  I finally realized why I hate the expression "Social Justice Warrior," though, and I may write about that at some point.

I take a peek at a new postapocalypse novel: